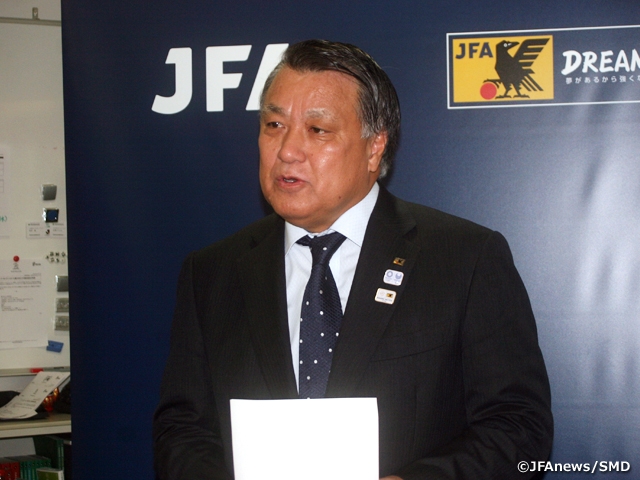 On Thursday 12 December, Japan Football Association (JFA) submitted the bid book, the signed hosting agreement, and all other hosting documents to FIFA for their bid to host the FIFA Women’s World Cup 2023™. TASHIMA Kohzo, President of JFA and Chairman of Japan Bid Committee, shared his aspiration, “From 2023, the FIFA Women’s World Cup™ will expand to the same tournament scale as the FIFA World Cup™. Over the years, Japan has showcased great operational capability and omotenashi (hospitality), and through these qualities, we hope to host a tournament that can make every participating country happy, while we as the host become happy as well.”

In 2007, JFA launched the “Nadeshiko Vision,” where it states the following two goals: “Make Nadeshiko Japan one of the top-class teams in the world” and “Host the FIFA Women’s World Cup 2023™ in Japan.” By submitting the final documents, Japan has officially made a step forward in the bidding process which started earlier this year.

In regard to the bid, President TASHIMA mentioned, “We consider our operational capability, safety and security, and stadiums to be our strong points.”

A total of 42 Base Camps for teams and referees, along with eight stadiums were proposed in the submitted bid book. Among the listed stadiums, Sapporo Dome (Sapporo), Saitama Stadium 2002 (Saitama), and Kobe Misaki Stadium (Kobe) are venues that hosted the World Cup™ matches in 2002, during the 2002 FIFA World Cup Korea/Japan™.

Seven out of the eight stadiums are football only stadiums, including Sendai Stadium (Sendai), Toyota Stadium (Toyota), Kyoto Stadium (Kyoto), Suita City Football Stadium (Suita), and the three stadiums mentioned above. In addition to the seven stadiums, the National Stadium in Tokyo, which will serve as the main stadium for the Tokyo 2020 Olympic and Paralympic Games, will be the centre piece for Japanese sporting events, and these stadiums will be a major selling point for the Japanese bid.

Starting from 2023, the number of participants in the tournament will be expanded to 32 teams. By holding the matches in eight stadiums and with the utilisation of well organised transportation systems like the bullet trains (Shinkansen), President TASHIMA commented that “A cost efficient tournament can be realised.” This approach consistent with FIFA’s competition operation policies, which values sustainability.

Currently, Australia, New Zealand, and Brazil are among those who remain as the candidates for the bid. President TASHIMA stated to stand by the “Japan's Way" throughout the bidding process, as he mentioned, “We comply with the rules established by FIFA to promote and outline our bid towards each association and confederation. In order to win this bid, I feel that it is important that we make efforts to maximise our strong points, rather than making comparisons with other countries. We will continue to share our selling points to make a case for ourselves.”

President TASHIMA concluded by stating, “Along with our bid to host the FIFA Women’s World Cup 2023™, we will continue to make our efforts to develop women’s football, through the Olympic Games, professionalization of women’s football in Japan, and grassroots activities, so please support us.”